We have found very interesting articles connecting our game with other aspects of our lives. Ph. D. Peter G Stromberg wrote an interesting article on chess and addiction that probably depicts the vision of life of many of our top chess players: “when the meaning of the game outweighs the meaning of the world, something that enhances life has slipped into something that detracts from it. It’s an open question whether this situation should be called addiction”. Is it necessary to become addicted in order to be a very good chess player? Probably yes.

We have also found a very interesting article from one chess addict, Sylvano. He is not a professional player and this describes better an ordinary chess addiction situation. This guy is very honest and gives some recommendations about how to balance your chess addiction and your everyday life.

What about chess and sex? Is somebody out there working on this? Probably yes. For the moment we have found GM Pogonina…..already working on this in 2010, but no idea whether her project saw the light. The article in The New York Times is short but interesting. Pogonina was at that time trying to write a book connecting chess and Kamasutra. Is that really possible Natalia?????? She also seems to say that chess can improve your sex life. So, Natalia, could we say that early chess geniuses can also be early sex geniuses? Is there any relationship between elo rating and sex life? Proportional? Inverse proportional? Let’s think a bit about all this. 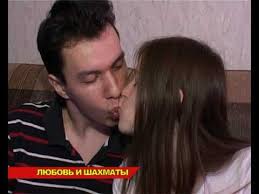 Here not thinking about chess for sure

Chess can be clearly an addiction, sex also and love is for sure the addiction that everybody suffers at least once in life. From the words of Natalia Pogonina we can imagine that this poor girl probably suffered the three of them at the same time back in 2010. We hope that she is still addicted to all of it and that she is managing the addiction well, as Sylvano is doing. At least we hope that she was able to go through withdrawal in case any of them ceased at some point. The most serious is probably love addiction, because love cannot be just ordered on demand. You can be a pretty girl and get sex. You can be a good chess player and play every single tournament you can, but love…You can’t order it. You find it and then you can only fight for it…or lose it as an idiot….

Love and chess is a complicated formula to make work. Do chess couples work well? Some do. Some don’t. Like in any other aspect of life. A couple works well if both members are really committed to keep the couple working. Many couples work under very strange conditions: having enemies in their families, being business competitors, not being able to live together, having kids with problems, having themselves health or mental problems, etc. Therefore, even if it is clear that the fact that both members of the couple are professional chess players gives some additional stress, it is at the end of the day not more than the stress existing in many other professions or situations in normal people’s lives. A couple works if both members want it to work, irrespective of the situation. If you love a person, you are somehow addicted to this person and you go through anything in order to keep this person as your partner. But not everybody has the maturity or the mental stability to be involved in couple life. The most interesting article that we have found on this subject can be read here. It is worth. One interesting thing we read in this article is that fighting in a couple is not bad, but actually very good, because the fighting is the basis to later discuss, solve and make the couple stronger for the future. Not fighting at all seems to be much worse…interesting.

In another post we referred to a chess.com article from the beginning of 2015. If we analyse the first 5 chess couples we find out the following about them 2,5 years later:

1.Hikaru Nakamura (29) – Mariagrazia Derosa (29): They still seem to be together. They are taking their time and they are not hurrying towards marriage or kids. Here of course the career of Nakamura is much more demanding than the career of Derosa, but they seem to be coping well with it. But, come on guys….Someday you need to take a decision and turn it into something serious!!!

2.Anish Giri (23) – Sopiko Guramishvili (26): They got married some months after the chess.com article was written and they had a son in October 2016. We have to say that their son was born while Giri was playing the Tal memorial tournament. He missed all the fun of it!!!! It seems that Sopiko did not take it the wrong way. They are young but they seem to have understanding for each other. Let’s see how they balance their careers -both quite demanding- and their personal life, including a baby!!

3.Raja Panjwani (27) – Alisa Melekhina (26): If we believe our informants and commentators, they are still together and both living in New York, probably together too. They are both not focusing much on chess lately and it seems that they are not in a hurry to get married or have kids. These two are also taking their time and first want to organize a proper professional life. But, we have to say one thing: if we look at their facebook pictures….Raja has much more pictures of Alisa than Alisa of Raja….much more. Does this means something? Probably nothing important….

4.Yury Shulman (42) – Viktorija Ni (25): If we believe one of our Chicago informants, these 2 are separated since mid 2016 and Yury is now living alone. It seems that there had been problems of different nature during years in this couple. Viktoria finally left the country with their son after the separation in 2016 and has been living since then in different countries. A sad and strange story that we prefer not to explain in detail, even if we have gotten reliable information about it.

5.Alex Yermolinski (59) – Camilla Baginskaite (50): This is absolutely the contrary if we compare it with the previous story. They got married 20 years ago and they have 2 sons. It seems that they took their time to enter the family life, but they did it with safety and stability.

We hope that you liked this article and we would like to see your comments. We have taken our time in order to write an entertaining and educative article and we have learnt a lot while doing it.